Starter packs have long given new pilots a boost to their early journey through the New Eden star cluster. With immediate effect, however, the established starter packs have been replaced with new editions, each having been revised to better serve the needs of today’s ambitious pilots.

Four packs are now available, from the introductory Bronze Starter Pack, through to the elite Platinum Starter Pack. Just as with the previous packs, each is filled with items that accelerate your early progress, giving you a chance to taste more of the full EVE experience, and letting you try on SKINs and other cosmetic items for size.

Pick up a Bronze or Silver Starter Pack, and you’ll get a spread of Omega time, Skill Points, Standard and Advanced 'Boost' Cerebral Accelerators, pilot apparel, and a selection of SKINs

Grab a Gold Starter Pack, and you get more of all those things, an upgrade to a Specialist 'Boost' Cerebral Accelerator, and 500 PLEX to spend or trade. Still want more? A Platinum Starter Pack provides the most ambitious pilots with even greater volumes of Omega and Skill Points, an Expert 'Boost' Cerebral Accelerator, 1500 PLEX, and access to Multiple Character Training certificates.

Whichever Starter Pack you choose, you can be sure it will supercharge your journey to mastery, while also providing a chance to explore different options as you build your pilot’s future (and if you are already an EVE veteran, the packs simply offer a great deal on a vast selection of piloting essentials).

So, what are you waiting for? Grab a new starter pack in the EVE Store today!

It's time again for another episode of the Community Beat! The universe has seen a plethora of events happen over the last few weeks and having to only pick a handful of them is always an incredible challenge! 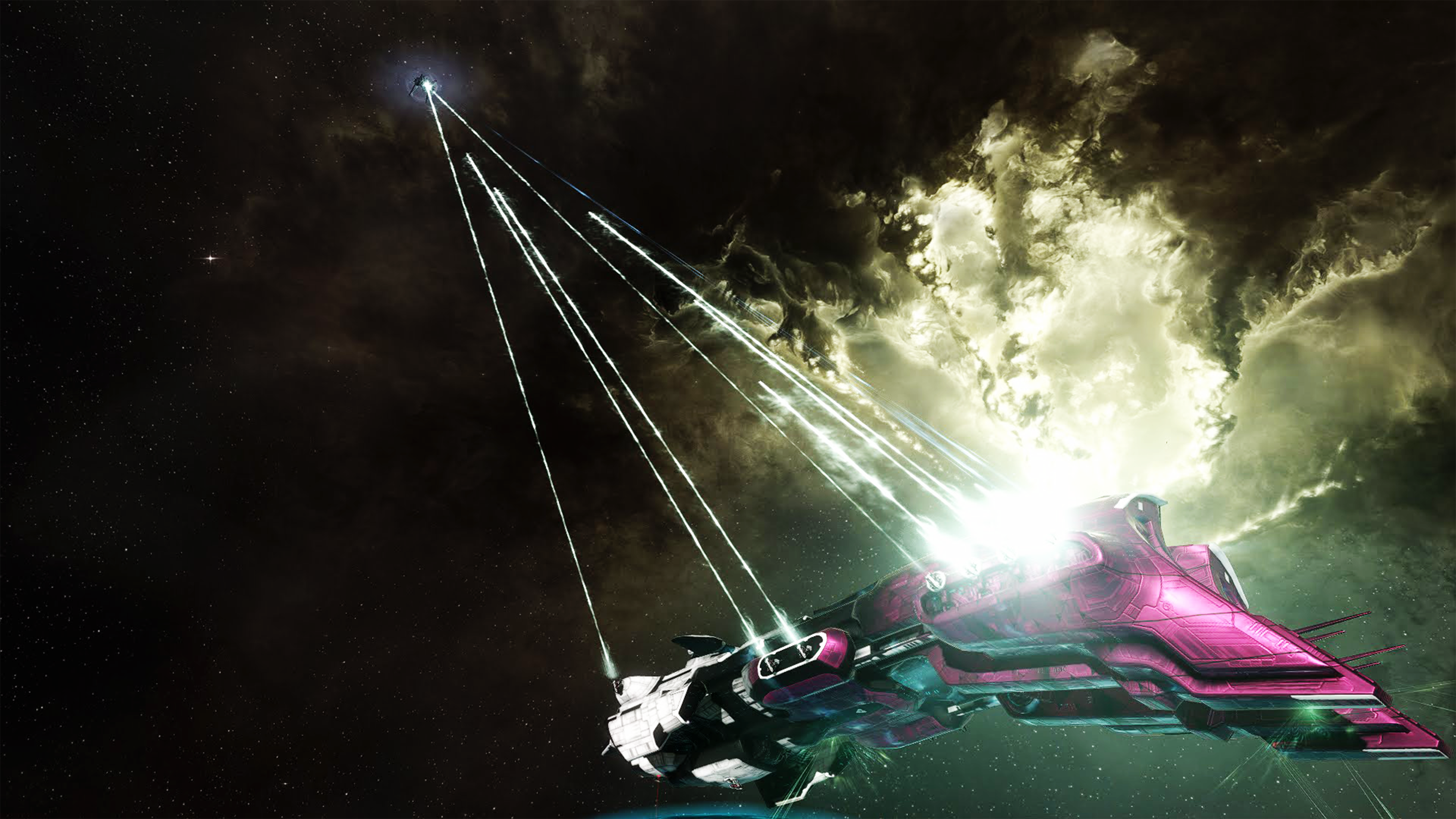 The last community beat was published between the two tournament weekends, so the winner was still undetermined! But it all wrapped up on 20 November with the crown being awarded to the alliance TRUTH. HONOUR. LIGHT. with Odin’s Call finishing second and WE FORM V0LTA coming third! We should have an article coming out next week with a few more details concerning their prizes, so keep an eye out for that!

In case you missed it, all 4 days are also up on Youtube with timestamps to every match in the video descriptions:

This year saw the return of flagships and one of the biggest losses this tournament came from the pilot Mark Bridges who’s flagship Vindicator (pictured above) fell to the into clutches of the team that ended up finishing third - WE FORM V0LTA - clocking in at a whopping 75.6B on zKill! His final moments can be seen over on Youtube.

However, Mark decided that the loss of the teams flagship wasn’t going to be his biggest loss of the year and 3 days after the tournament also decided to go ahead and lose one of the prize ships from last years tournament: a Laelaps at a measly 236.4B ISK loss!

We’ve been in contact with the SCC and given them the heads up that when it comes to insuring this guys ships in the future that we’d recommend they send the guy with the "Big Spreadsheet"! 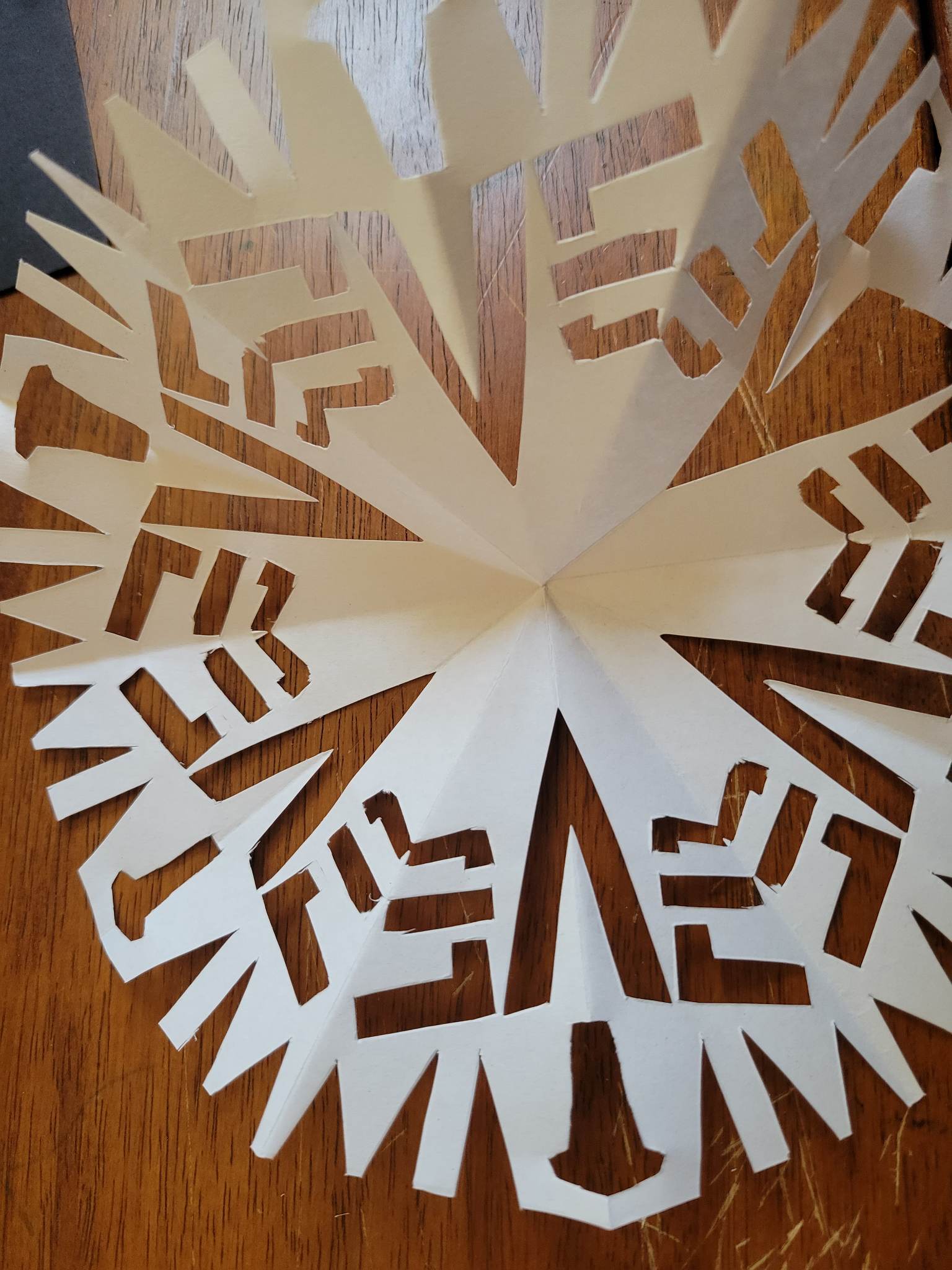 The time of the Winer Nexus draws ever closer, the ice storms that start roaming New Eden is something that capsuleers have become accustomed to.

u/EveBabyMorgan over on Reddit is certainly getting into the festive mood and has been making Snowflakes with their kid. Whilst their kid may have rated it "meh" we rate it 11/10!

We can’t unsee the little Avatars and Wyverns inside it and will no doubt be attempting to reproduce it as part of our own decorations. Outstanding!

We come from the land down under!

Organised by Sin Alarma, CCP Larrikin attended Eve Down Under (EDU) to meet some of our Oceanic players! Rumor has it that CCP Larrikin did a small presentation at the event and one of the biggest reveals was the owners of the most exotic dancers in the AUTZ..? Some secrets shared at EDU stay at EDU!

Whilst you may have missed this year, if you are able to get to the Melbourne area we’d recommend hopping into their Discord for the next time it comes around!

KhanPass01 Milehere of the Alliance "Covert Otters Venture Into Darkness" did a video of his most recent venture in a Phoenix Navy Issue, where at the end of engagement he contributed towards over half of the 116 ships destroyed in an engagement. Sure, they may have come out technically ISK negative, but the absolute death toll was something to behold! Checkout the video below:

No man could truly tame a wolf! 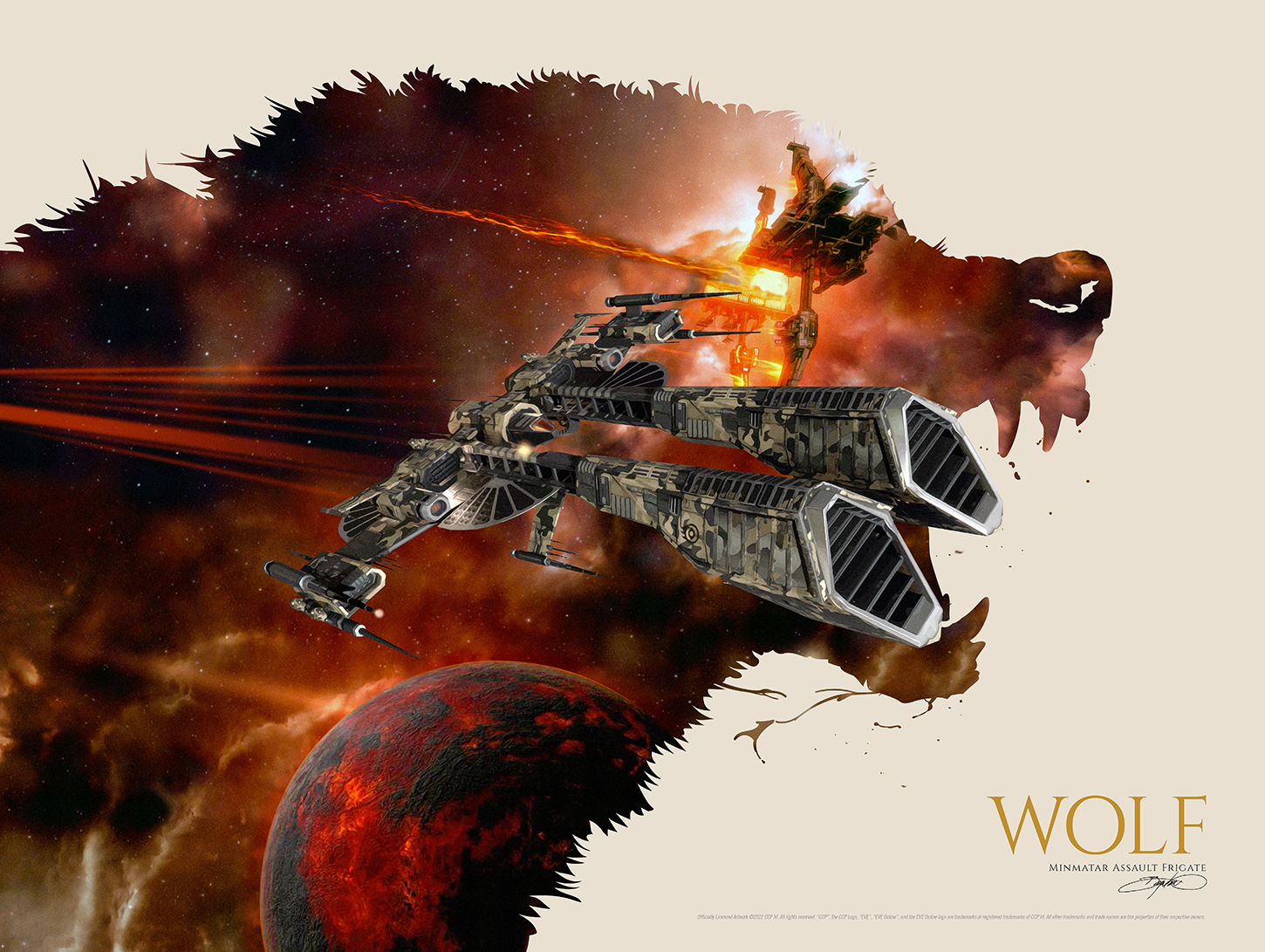 Renowned illustrator Rixx Javix also impressed us recently with his latest range of Assault Frigate illustrations - we felt the Wolf in particular was stunning and deserved a little featuring of it its own! You can pick up a print for yourself over on his website. 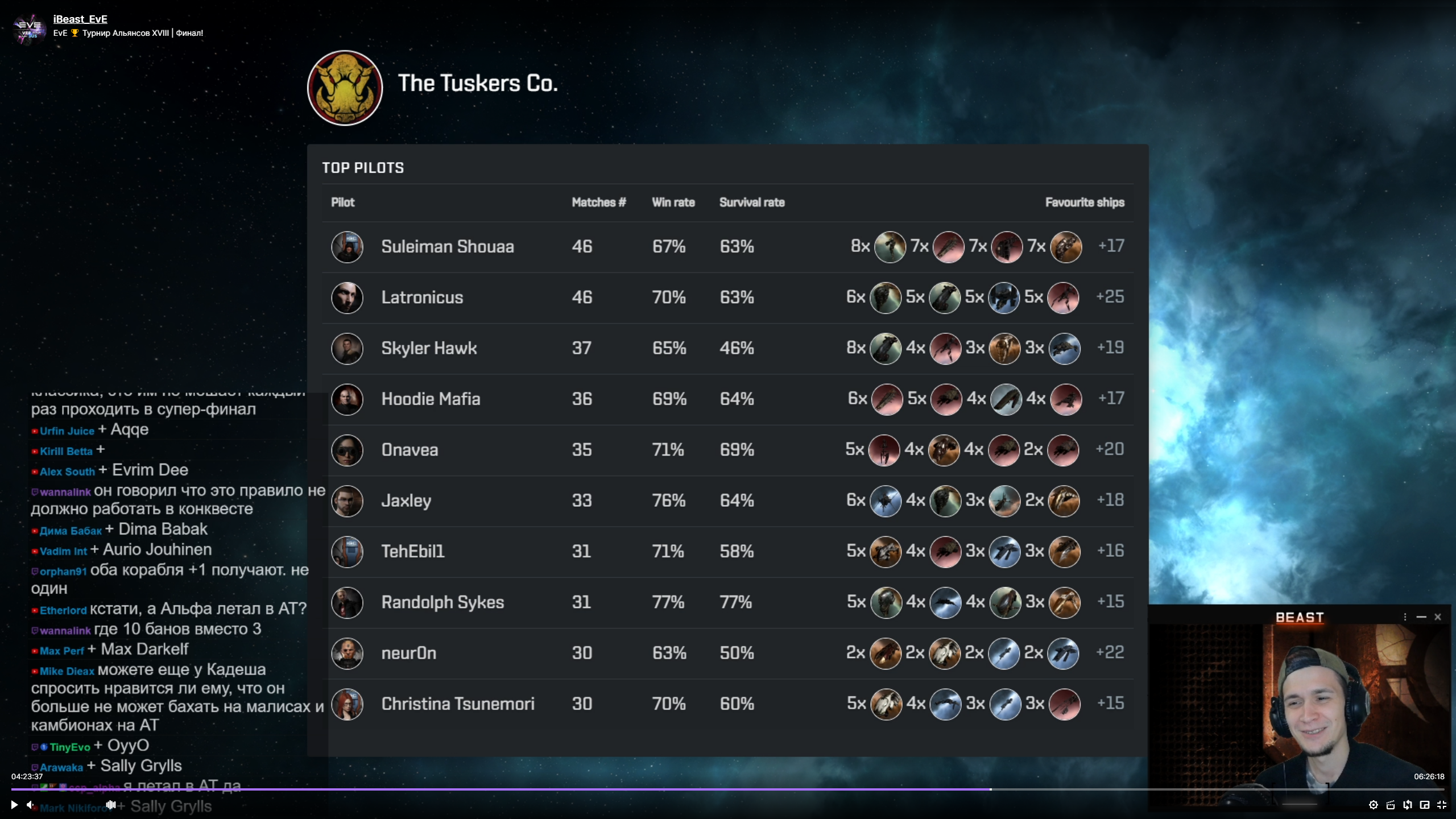 We usually like to do a shoutout to an Eve Partner in the community beat and this time we’d like to give a shoutout to iBeast. During the recent Alliance Tournament he and CCP Alpha broadcasted the tournament for our Russian speaking audiences!

Not only that he recently also hit 50,000 subscribers over on his Youtube channel! A monumental achievement, well done!

Across the cluster, loyal capsuleers have risen up and supported their empires in the race to obtain and leverage exciting new technology. These goals were achieved through capsuleers taking part in Factional Warfare, exploration (hacking), and mining activities within the hottest warzones. Mounting tensions due to these conflicts have led to seismic events in New Eden, such as the devastation in the Minmatar system of Turnur caused by the Amarr stellar transmuter, as well as the Gallente invasion of Intaki, and the Caldari seizing multiple systems in the Syndicate region.

The Empire Frontiers events seeded much of the growing tension that has resulted in the above consequences. With these events now at an end, what are the results of the Amarr vs Minmatar race for stellar transmuter technology, and the Caldari-Gallente stargate construction in Athounon?

Aggressive advances by the Amarr Empire in Turnur, Egmar, and Vard meant that they had a stellar transmuter pointed at the sun in each of those systems in lowsec. The Minmatar Republic then rallied to take over Egmar and Vard, while the Amarr maintained their hold over Turnur. Both factions called on those loyal to them to collect data vital to their progress in the surrounding systems, with the Amarr obtaining their results just ahead of the Minmatar.

What happened next was the catastrophic loss of control and destruction of the Amarr stellar transmuter in Turnur due to instability within the star, followed by the devastation of Turnur I and subsequent new wormhole phenomena in-system.

Meanwhile, the Minmatar were able to help save Egmar and Vard from the same fate. Capsuleers loyal to the Republic successfully depowered the stellar transmuters around those respective stars, spurred on to achieve their goals in those systems and ensuring that the devastation seen in Turnur was not repeated.

Capsuleers on both sides earned tokens which they either sold for ISK or exchanged at Loyalty Point stores for early access to Amarr and Minmatar navy battlecruiser and navy frigate blueprint copies (BPCs). 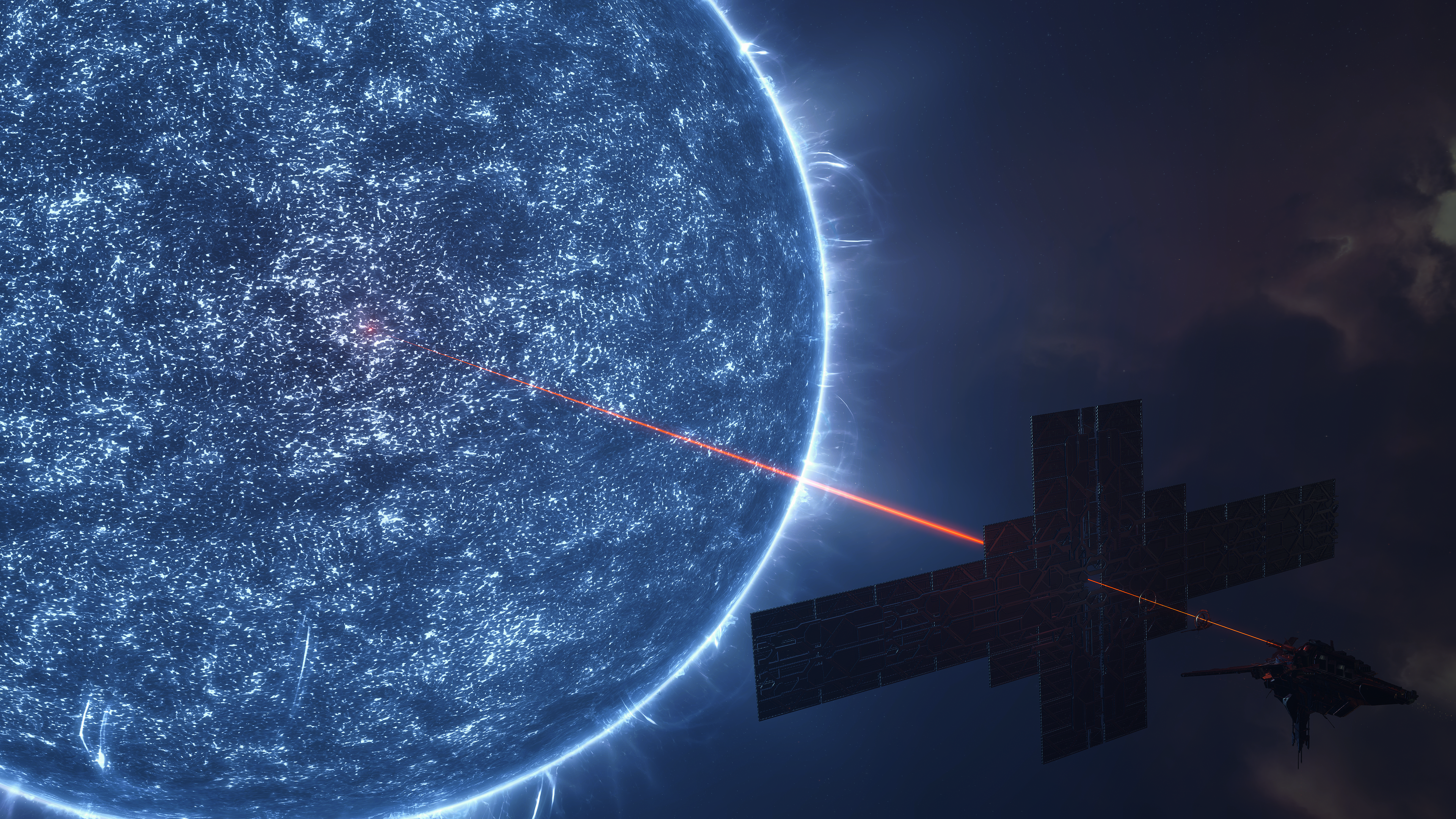 When capsuleers discovered a mysterious structure on Athounon V and started recovering data fragments of what may have taken place on the planet’s surface, the Caldari State and Gallente Federation rapidly assembled forces in the Samanuni and Amygnon systems, respectively. They called upon loyal capsuleers for assistance in constructing a stargate from their respective systems to Athounon, with the Caldari scoring a resounding success by finishing their project well ahead of the Gallente, linking Samanuni to Athounon.

Capsuleers aiding the Caldari also decimated Gallente efforts in obtaining tokens through Factional Warfare, exploration, and resource gathering activities, meaning that they were able to trade them for ISK or navy frigate and battlecruiser BPCs ahead of their wider release with the Uprising expansion on 8 November.

Speaking of the events of 8 November, outside parties had thought that the build-up of Gallente forces in the Amygnon system was purely to prepare for the outcome of discoveries in Athounon, but it was in fact in preparation for the surprise invasion of Intaki! Federation forces took Intaki Prime and 10 surrounding systems, creating shockwaves throughout New Eden. As a result, the Caldari State moved to occupy the constellation of DS-M4Q by invitation from the Intaki Syndicate, as well as establishing a stronger presence in Athounon and preventing the Gallente from completing their gate construction. 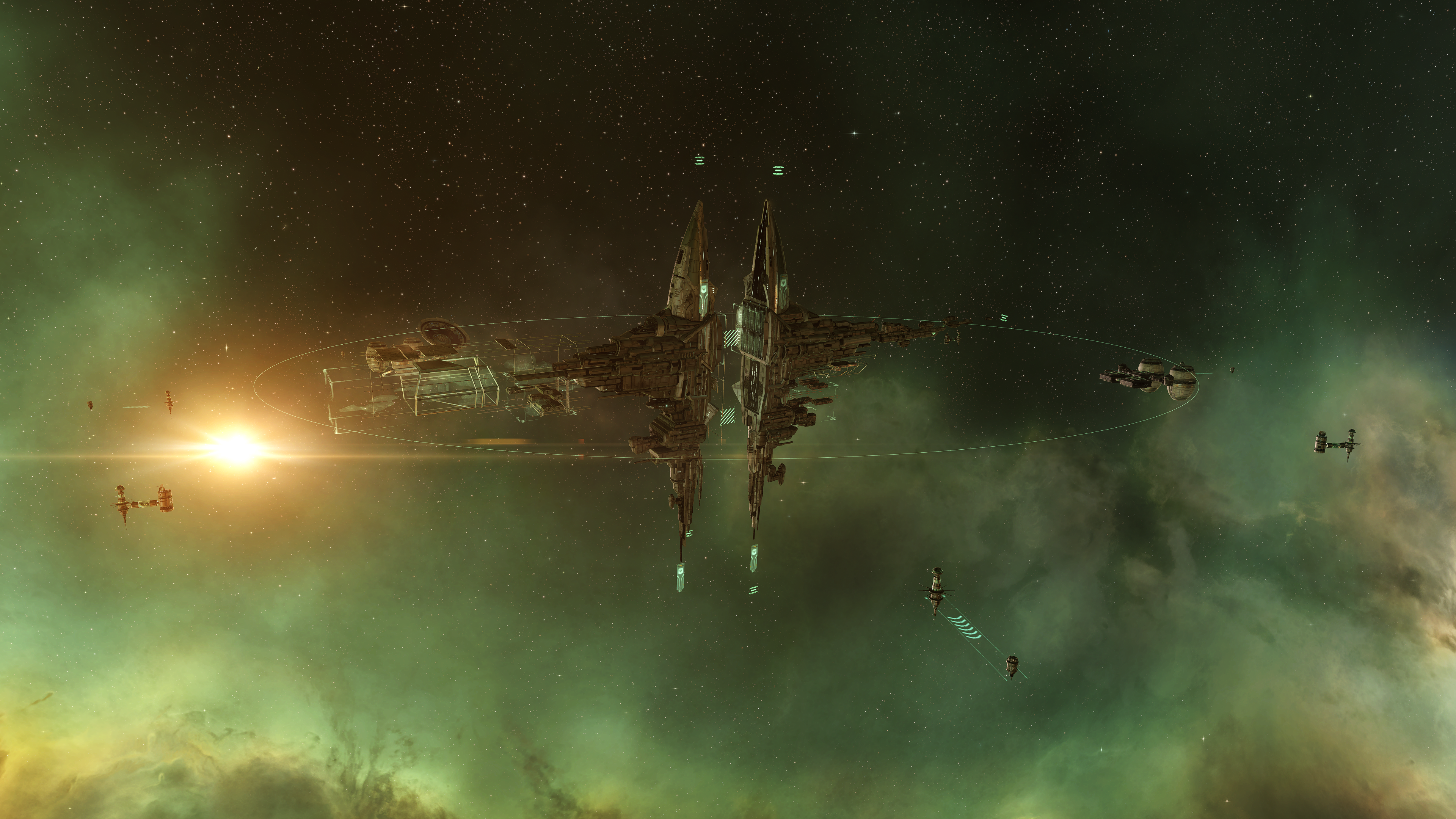 Congratulations to all triumphant capsuleers who aided their empire’s quest for advancement, secured prized territory for the cause, and earned early access to valuable rewards, plus plenty of ISK and glory! Keep your eyes peeled and your ears to the ground for further developments as more details regarding the nature of the Triglavian research tech found on Athounon V will be revealed as the story unfolds.